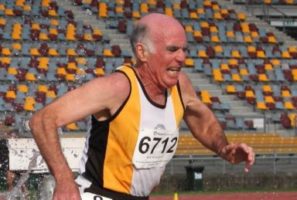 Bob has over 40 years’ experience in Australia and the Oceania region as a Masters competitor in Local, Regional and World competition; an athletics administrator during all this period. His commitment to Masters Athletics in Western Australia was rewarded by being the recipient of an Australian Sports Medal in 2000 and on a regional level with a WMA Bronze pin in 2015.

Bob founded the Victorian Veterans East Burwood competition before transferring to Western Australia. A Life Member of MAWA, he has held the positions of President, Secretary, Treasurer, Handicapper, Race Director and representative to numerous AMA Annual General Meetings. Whilst a member of the organising committee for a number of AMA championships Bob has also managed to compete and officiate at these events.

On behalf of AMA Bob has served on the Board and as Vice President, Team Manager, produced the AMA Handbook, managed the AMA website and was responsible for the program scheduling and technical requirements of the 2016 Perth WMA Championships. From 2008-2019 Bob was the OMA Secretary where he was responsible for the day to day workings and administrative aspects of the Association.

As a member of the WMA Competition, and Law and Legislation, Committees, Bob is responsible for providing competition technical advice, research into locations for the WMA Marathon Championships, the upgrading of Championship rules and other legislative requirements. 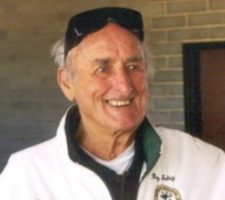 Roy commenced his athletic career with the Glenhuntly Athletic Club participating as an athlete, Secretary, President, and throws coach. Progressing into Victorian Veterans Athletics Club Roy established himself as a national and world class athlete over twenty-five years in all throws disciplines. In the process he achieved numerous State, National and World titles and records. In the late 1970’s Roy was an instigator of the Weight Pentathlon and the development of an appropriate competition short handle heavy weight. Roy was instrumental in the inclusion of the Weight Pentathlon as a trial event at the World Veterans Athletic Championships, Melbourne 1987. He also established points tables and age-graded tables for the Heavy Weight Throw and the Weight Pentathlon. With a need for accurate record keeping Roy became Statistician compiling a database of records set at all State, National and World competitions. Roy established the World Weight Pentathlon Throwers Group and organised postal competitions between European counties, Australia and New Zealand. Roy was patriarch of the throwers group, long term Victorian Veterans Athletic Club committee member, board member Australian Association of Veterans Athletic Club and technical delegate to the World Association of Veterans Athletics .