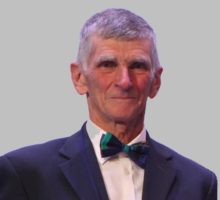 Since his return to athletics in 1987 Andrew has proven to be one of the most prolific racewalkers in Australian and World Masters Athletics. The list of world records that Andrew has achieved is phenomenal; with many of his age-graded performances placing above 95 percentile.     Andrew is a positive ambassador for Masters Athletics, an outstanding role model for athletes of any age and the general community.Successful at both sporting and professional levels,  Andrew remains unassuming and unpretentious and demonstrates humility towards fellow competitors and team mates.Recognised at the highest level Andrew has been awarded the IAAF Male Masters Athlete of the Year in 2007 and 2016; Australian Male Masters Athlete of the Year 2008/9 and 2013 and AMA Walks Award 2004, 2007, 2012 and 2013.